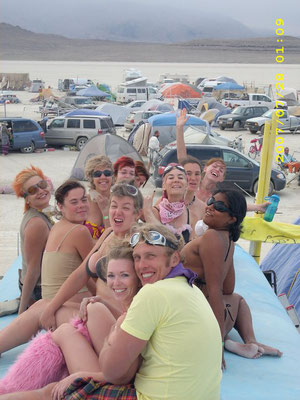 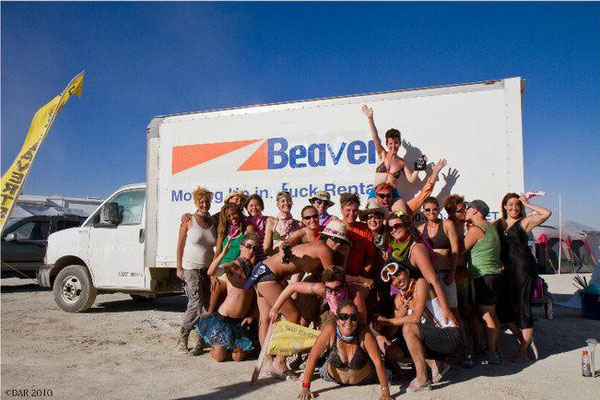 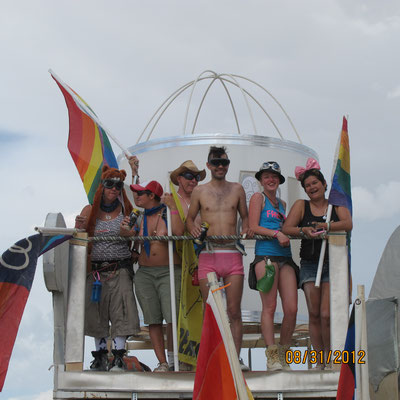 Camp Beaverton for Wayward Girls was founded in 2007 at the request of a long-time lesbian Burner. Exasperated she couldn’t find other lesbians with whom to frolic in the dust, she asked her dear friend Reid Mihalko to “make her a camp.”

Despite being a cisgender man, Reid obliged his friend’s request and created Camp Beaverton for Wayward Girls. His organization skills and support for lesbian culture allowed him to enlist 18 women as the founding members of the camp. For the inaugural year, Reid acted as honorary “Mayor” despite being unable to enjoy some of the more exciting parts of the camp, including the women-only Beaver Den. As a supportive ally, Reid camped as our neighbor in the Beaverton “Mannex.

From that very first year, Camp Beaverton became the destination for queer women at Burning Man. We hosted a series of workshops and provided a safe space for lesbians and bisexual women to explore their sexualities and sisterhood.

Camp Beaverton began on the playa as a subcamp of FreedomCommunity Village, a pangender camp dedicated to exploration of personal freedom.

For three years, Camp Beaverton shared infrastructure with FreedomCommunity, including commandeering their large dome once each Burn week for the women-only play party, the Strap-On-A-Thon. The very first Strap-On-A-Thon was a fundraiser to get the camp up and running, and was held in a tiny New York City loft. The second Strap-On-A-Thon was held on playa in the small “Beaver Den” for all women-identified (including trans women) Burners. The welcome circle was hosted by Diana Adams who led the 4-dozen attendees through consent and safer-sex conversations and provided two huge bags of sex toys for all to enjoy.

As Camp Beaverton grew, we raised funds and muscle to create an independent camp, purchasing our own large dome, kitchen, storage units, and more.

In 2010, we paid FreedomCommunity’s generosity forward and helped usher another camp into independence: Gender Blender. Functioning as sibling camps, the relationship between Beaverton and Gender Blender allowed folks exploring their own non-woman gender identities to find a home.

As Burning Man has grown, so has Camp Beaverton. In 2016 we hosted over 50 Beavers and welcomed hundreds to the Strap-On-A-Thon. We now have a presence at many regional burns, as well as decompressions. We gather off playa in small groups of beloved friends, linked by our identities, our communities, and our passions.

A safe space for women on- and off-playa